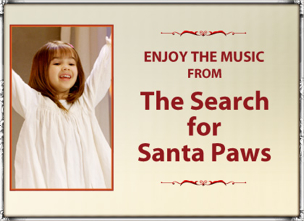 Plot Summary: Magic dogs and an elf team up with two children to rescue Santa who has lost his memory. A sort of an Annie meets Santa Buddies, The Search for Santa Paws is a musical production that tells the story of how Santa and a young dog named Paws became best friends, and together forever changed the lives of a houseful of New York City orphans and a host of other New Yorkers. The film chronicles Paws’s desperate attempts to find Santa when they’re separated in New York City, the important roles both Santa and Paws play in spreading the Christmas spirit to children and adults alike, and the concern of Mrs. Claus and the elves over Santa and Paws’s longer-than-expected absence from the North Pole. The film also has some very dark, potentially distressing scenes in which young orphans are verbally abused, neglected, and unfairly punished, as well as one particularly scary moment when a young girl endangers her life by crawling into a working incinerator. First and foremost a touching story about the power of giving and believing, the film is also a treasure trove of big musical numbers that feature everything from Broadway-style productions to pop-inspired songs and emotionally charged ballads that are nicely performed and choreographed--especially those by Madison Pettis, Kaitlyn Maher, Richard Riehle, and Danny Woodburn. The animation is well done and blends seamlessly with the live action--something that’s in stark contrast to some of the poorly handled animated scenes found in the 2009 Santa Buddies. Bonus features include a pop-up storybook narrated by Rosebud of the Buddies movies, a sing-along option for all the songs in the film, and deleted scenes. (Ages 5 and older)